For years, one of my favorite reading exercises was to pair fiction and nonfiction

titles. By that I mean if there is a novel written about a particular incident or person, read more about it by delving into a nonfiction account or biography of the incident or person. For example, Arthur Vanderbilt’s absorbing story of the rise and fall of the Vanderbilt wealth in Fortune’s Children could be paired with Theresa Fowler’s latest novel, A Well-Behaved Woman.

Or read more about Hitler’s concentration camp for women featured in Kristin Hannah’s The Nightingale, by picking up Sarah Helm’s Ravensbrück; or after reading Beatriz Williams’ The Glass Ocean, find out more about the sinking of the Lusitania in Erik Larson’s Dead Wake. And pairing movies can also be fun such as reading the spooky novel Help for the Haunted by John Searles, which was based on a real-life haunting featured in The Conjuring.

That brings me to two books I’m excited to share, one really old (like published in 1911 old) and the other published 107 years later (this year for the math-challenged).

When I started working at the library waaaay back in 1974, despite its re-bound plain blue cover, Fifteen Thousand Miles by Stage by Carrie Strahorn (the subtitle “A Woman’s Unique Experience during Thirty Years of Path Finding and Pioneering from the Missouri to the Pacific and from Alaska to Mexico,” pretty much covers the topic), caught my 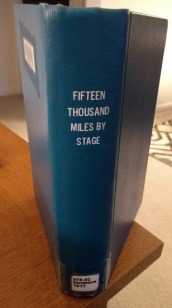 eye every time I passed the travel shelf (it was later re-cataloged into the history category).  I loved the idea of this woman traveling all over the west in the late 1800s by stagecoach and was fascinated with the photos and drawings by C. M. Russell. I never read the book cover to cover but would periodically check it out and read parts of it (probably one reason it’s never been weeded from the collection!). What I got from the book is that Carrie Strahorn’s travels alongside her husband, Robert, as they scouted our various locations for railroads and founded a few towns along the way (such as Caldwell, Idaho, and Ontario, Oregon), was an amazing adventure and a story of resilience to not only travel under challenging conditions, but to also keep her marriage intact. So I was thrilled to see the new novel by Jane Kirkpatrick, Everything She Didn’t Say, a novel based on Carrie Strahorn’s life.

Much to Carrie’s annoyance, she was very curvy and robust, which she called “fluffy.”

A little background on Jane Kirkpatrick, a writer from eastern and central Oregon.  I’ve been recommending her historical novels for 23 years (especially Gathering of Finches, set at Shore Acres near Coos Bay) as her novels based on real women of the west are “clean” and well received by readers. The novels have always been described as “faith-based” or “inspirational” but I found that while they were based on Christian beliefs, the messages weren’t at all heavy-handed. You can find a complete list of her books here.

When I started reading Everything She Didn’t Say, I was a little turned off by the clunky title and the fact that Carrie’s story seemed a little remote. It wasn’t long, though, before I couldn’t put this down and having her memoir alongside to check certain passages greatly enhanced the experience.  And the reason for the title is that Kirkpatrick did a lot of in-depth research and reading-between-the-lines to expand Carrie’s story of what wasn’t said in the memoir and what could have happened in her personal life. Especially enjoyable was the epilogue where Kirkpatrick explains how she came to write the book and gives information about her research.

One of my favorite parts of the novel is when Carrie is talking about working with C. M. Russell about the drawings and she said about one sketch: “…he made me look as lithe as my niece instead of the ‘fluffy woman” I always was.”

Bottom line is I loved Kirkpatrick’s book and believe anyone interested in Oregon and northwest history, along with true travel adventures during a tumultuous historical period, will enjoy both books.