I have a fantastic memory (which served me well when helping readers find the book that had a red cover and was set in New York City), but while I remember much of what I read over the past 64 years, please know I can’t pinpoint the age I read the books that shaped my reading life–well, except for a few smutty ones but we’ll get to those later.

This is where the magic happened. Kids to the left, adults to the right.

Discovering the Joys of Books in Series

My memory of walking into the Cottage Grove Public Library and inhaling that unique “old books” scent is as vivid as if it happened yesterday, but what I also remember is the feeling of anticipation to see what new books awaited me for my reading pleasure–and that hasn’t abated a whit since then. It wasn’t long before I discovered books in series and that I loved following a particular character. I don’t recall reading many Beverly Cleary books (except for Fifteen in my later years) but loved Carolyn Haywood’s Betsy series.

However, Betsy and the gang were left in the dust when I discovered Nancy Drew. Whenever I entered the library, a beeline was made to the rack to see if there were any of the tweedy blue cloth-covered

mysteries I hadn’t yet read.  I don’t think the library had a system for reserving books (or if they did, the librarian, Miss Clark, never offered as she might have known she’d be pestered to death), so I would rely on my memory to remember what I had read. I liked some more than others and the ones I liked best probably took place in mansions. (As an adult I relived my “Drew” years by reading Chelsea Cain’s delightful Confessions of a Teen Sleuth.)

I went on to devour the Hardy Boys series, and after those were exhausted, read the Trixie Belden, Kay Tracey, Judy Bolton, and Ginnie & Geneva series (never got into Bobbsey Twins as I think I found them a little twee) but my next obsession came from a Mickey Mouse Club addiction.

If you are close to my age, you probably remember singing along to the opening of the Mickey Mouse Club — “Hey There! Hi There! Ho There! You’re as welcome as can be!” But what I loved most were the introductions of the club members and Annette’s appearance! Y? Who knows, I just know she fascinated me, and I was thrilled to find she was featured in a mystery series I found at the five-and-dime store, Knickerbocker’s.  I read Sierra Summer multiple times which give me a  hankering to visit California’s Gold Country.

Since these cheaply bound books weren’t in the library and cost only 10 cents, it was easy to splurge on others, including the Donna Parker series. The one I loved most was Donna Parker in Hollywood, and what sticks in my mind was her itchy black wool bathing suit.  This was most likely the book that set me on the road to ruin when it came to my love of anything set in the glamourous world of La La Land, including celebrity memoirs and books by Jackie Collins.

Get Me the Next Book, STAT!

My next obsession came in the form of nurse stories, mainly the series featuring Sue Barton by Helen Boylston and Cherry Ames by Helen Wells, starting with their first adventures as student nurses. Sue Barton had a life trajectory that wasn’t all apples and roses so I don’t remember reading the later titles and wonder if it was because the library didn’t carry them due to the “real-life” content. Still, I loved reading her experiences in the years before marriage and kids. (An interesting side note about the author, Helen Boylston: She based her books on her actual nursing experiences, plus she was also a good friend of Rose Wilder Lane, who called her “Troub” for “Trouble, and lived with her for several years, some in Albania.)

The Ames series was fun as Cherry immersed herself in various jobs, probably a forerunner of my love for “behind-the-scenes” kinds of narratives.

And hey, who remembers these? I used my allowance to buy Harlequin nurse stories at the corner hole-in-the-wall magazine store. 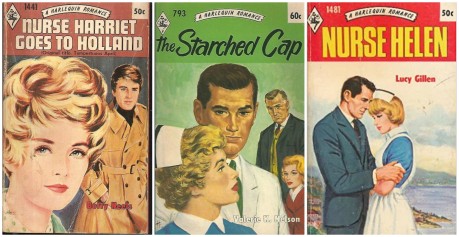 I also spent my allowance on comic books (12 cents each!) with my favorites being Superman and Archie, but I would also read Batman, Richie Rich, and Casper, and these weird comics based on classic books such as Huckleberry Finn, Robinson Crusoe, and more.

Next up I return to my early teens where Miss Clark introduced me to my next genre fascination and allowed me to check out smut.

If you missed the first installments, you can find the first one here and the second here.